The Star: "Melting Pot KC stops in at ‘Shady Pines’ for season opener" by Robert Trussell 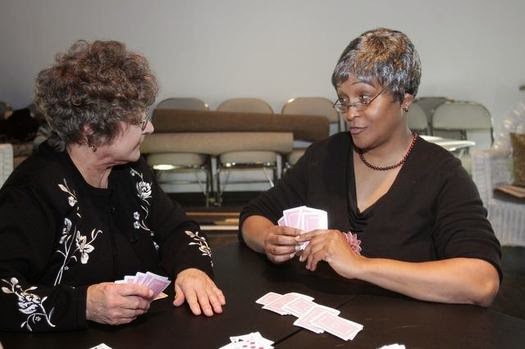 Melting Pot KC, one of the resident theater companies based at the Just Off Broadway Theatre, kicks off its spring season with “The Frowning Vajayjays of Shady Pines,” a new work by Kansas City playwright Vicki Vodrey.

Vodrey has established herself as a writer to watch by following a seemingly simple pattern: Introduce a play at the KC Fringe Festival and then take it to the Midtown International Theatre Festival in New York.

Vodrey said she intended to produce a shorter version of “Vajayjays” at the fringe fest this year. But Harvey Williams, artistic director of Melting Pot, heard her read the script at a monthly gathering of playwrights at the Metropolitan Ensemble Theatre and immediately asked her to forgo the fringe fest and let him produce the play at Just Off Broadway.

The initial version, Vodrey said, was only about 20 minutes long and depicted two elderly women, one white, the other African-American.

“I had planned to do the show for Fringe and Harvey Williams came up to me afterward and said, ‘I want you to pull this show,’ ” she recalled. “And I was afraid I had offended somebody, but he said he wanted Melting Pot to produce it.”

The resulting play centers on a group of women in an Alabama retirement home. Vodrey said it runs about 90 minutes and can be staged with or without an intermission.

Williams said the play fits perfectly with Melting Pot’s mission of depicting people from diverse walks of life in terms of ethnicity, gender and age.

“I saw that it was a great piece that caught my attention,” Williams said. “I asked her if she intended to complete it as a full-length script. So at that point I said, ‘Well, stop showing it; don’t show it to anybody else.’ Then I told her about Melting Pot and what we were looking to do.”

“We’re trying to diversify things, and this script is about older women in a retirement home and dealing with basically being at the end of the road,” Williams said. “But the underlying story is that it’s a Southern nursing home and one of them dies and her replacement happens to be black. There’s a lot in it about acceptance. I was surprised after the script was finished. She got a lot in there about relationships and what people go through.”

Vodrey, meanwhile, will have a different show in KC Fringe Festival this year, and she has decided to enter “Thank You Notes” in the New York International Fringe Festival.