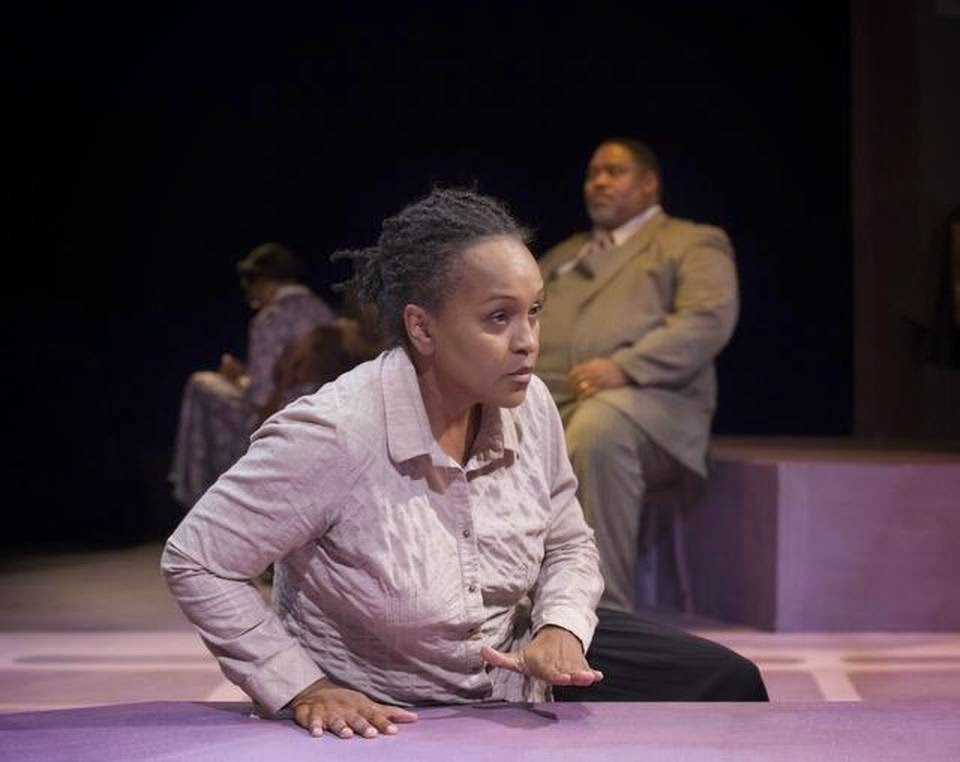 Congratulations to Sherri Roulette-Mosley, seen recently in Echoes of Octavia by MDC's Michelle T. Johnson, who deservedly appears on the cover of this week's Preview section of the Kansas City Star:

In August, for example, Roulette-Mosley was in the cast of Michelle Johnson’s “Echoes of Octavia,” a world premiere produced by MeltingPot KC.

“She’s someone who has a passion for it, number one,” Williams said. “But number two, she’s at a maturity level where she knows what it takes to make a part genuine. Even if it’s an established role, she puts a fresh face on it. She’s very unselfish. She wants to do what makes the scene work.”

At the same time, Williams said, she has a stage presence that effortlessly draws viewers’ attention.

“She just blends into a scene, but if she was not sitting there listening to the conversation, that conversation would be worthless,” Williams said.

Read on for the entire article.


Read more here: http://www.kansascity.com/entertainment/performing-arts/article2226014.html#storylink=cpy
For Sherri Roulette-Mosley, this is the feast time.

The veteran actress, who plays multiple roles in the Coterie production of “Rosa Parks and the Montgomery Bus Boycott,” has been plying her craft for decades, performing as an actor or standup comic in Kansas City, New York and Chicago. She’s been in and out of town. She’s played big roles and small.

She’s appeared in other productions at the Coterie, at Metropolitan Ensemble Theatre and in MeltingPot KC productions at Just Off Broadway Theatre. And lately she’s been on a roll that will continue well into next year. She has never joined Actors Equity, the union for actors and stage managers, although she’s performed in enough Equity shows that she could.

“I’m booked up right now through the third week of February,” she said. “It’s been a very blessed year. You know, I use that word sincerely. I’ve been able to work nonstop. I’m in the feast times and I’m enjoying the feast because famine could be just around the corner. And I think it is because I’m not Equity and I have more options open to me.”

Roulette-Mosley speaks of her varied career with a modesty that people who work with her say is absolutely genuine.


“She’s wonderfully generous,” said Karen Paisley, artistic director of the MET. Paisley has directed Roulette-Mosley in “The Kentucky Cycle” and “For Colored Girls Who Have Considered Suicide/When the Rainbow is Enuf,” among other shows.

“She has a great sense of humor,” Paisley said. “She’s got a beautiful integrity that’s not sanctimonious.”

Roulette-Mosley was born and raised in Kansas City and studied theater at Grambling State University, a historic school with a predominantly African-American student body. One of her classmates was Kansas City-based director Jacqueline Gafford.
Roulette-Mosley and her husband, Jesse Mosley, have been married 29 years. They have five kids, none of whom has any interest in theater.

At her husband’s urging, Roulette-Mosley once decided to try her hand at standup comedy. She figured it would be something to do between acting gigs. So she went to open mic night at Stanford & Sons.

“I just did it on a dare,” she said. “I would hate to think this is the case … but back then they didn’t have a lot of women. And because they thought I was funny before I knew it, I was getting gigs here and there.

“And it all happened so fast I wasn’t prepared for it. It kind of scared me. I had a chance to open for Ellen DeGeneres … and (famous) people invited me out to California. It just scared the heck out of me.”

Roulette-Mosley’s participation in a standup competition led to her one and only appearance at the famed Apollo Theater in Harlem, where she faced the historic theater’s notoriously unforgiving audience.

“They pay you really nice,” she said. “Sinbad was the host … and my green-room roommate was Kim Coles. And I remember that the producer loved this corny joke. I knew this joke was not going to fly with these people. People at Stanford loved it. And I said, ‘Are you sure you want me to do that?’ She goes, ‘I guarantee you it will be wonderful.’”

The show was taped for television, and the producers promised that anyone who got booed would be cut from the broadcast, which took a little pressure off.

“I’m seeing Kim Coles being booed, but she knows how to handle them,” she said. “I couldn’t even get the joke out (before booing began). It was like a big wave.… But I’m still going on, and the booing just got louder and louder.”

Back in the green room she felt bad. Other performers tried to cheer her up. Getting booed at the Apollo is a kind of badge of honor, they suggested. And the TV producers told her not to worry because they could add laugh tracks and cut the boos. Later she caught the broadcast and discovered they weren’t being straight with her. The boos were all there.

“Their reason was because I looked so adorable trying to handle the audience that they kept it in,” she said.

Roulette-Mosley said it took her 15 years to really get over the emotional trauma of being booed on national television. But now she appreciates the experience. After all, she can include something in her resume that many can’t: She played the Apollo.

A happy return to KC

The joke among African-American actors in Kansas City used to be that they could count on getting a show in February — Black History Month. Theater companies don’t do that so much anymore.
Roulette-Mosley’s husband worked for the General Services Administration, and job transfers led them to four years in New York and 10 in Chicago. But when she came back she saw important changes in the theater scene. These days there are more young actors living here. And more actors of color.

“It really is exciting for us older ones in Kansas City,” she said. “We came up at a time when there was no diversity and there were only certain roles we could play. If the script didn’t say ‘black’ specifically, you didn’t get the role.”

Coterie, she said, was the first theater in Kansas City committed to color-blind casting.
“And they have continued doing that all the way through,” she said.

She said Theatre for Young America, too, was committed to diversity. Other theaters, not so much.
“I would go into an audition, and you could sense it: ‘What is she doing here?’ I never felt that here,” she said.

The flip side is being considered only for traditional African-American roles.

“You really do want them not to patronize you,” she said. “You don’t want it to be the affirmative action of casting. You want them to be sincere when they cast you.”

There are more theaters now and most have a clear commitment to diversity. Some of them are producing new material, sometimes by Kansas City writers. In August, for example, Roulette-Mosley was in the cast of Michelle Johnson’s “Echoes of Octavia,” a world premiere produced by MeltingPot KC.

“She’s someone who has a passion for it, number one,” Williams said. “But number two, she’s at a maturity level where she knows what it takes to make a part genuine. Even if it’s an established role, she puts a fresh face on it. She’s very unselfish. She wants to do what makes the scene work.”
At the same time, Williams said, she has a stage presence that effortlessly draws viewers’ attention.
“She just blends into a scene, but if she was not sitting there listening to the conversation, that conversation would be worthless,” Williams said.


Onstage
“Rosa Parks and the Montgomery Bus Boycott” runs through Oct. 19 at the Coterie in Crown Center. For more information, call 816-474-6552 or go to TheCoterie.org.