Some well-deserved attention for MDC's Vicki Vodrey, as she prepares to produce plays at two fringe festivals in one summer...! 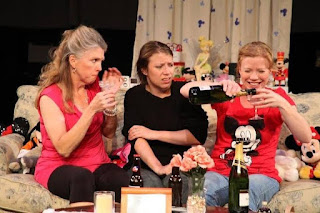 It won’t be the first time Vodrey’s plays have been performed in New York, but getting into the New York Fringe is a gold-star entry on her resume.

The play is “Hard Day’s Night,” which audiences first saw last year at the KC Fringe Festival. It depicts the comically dysfunctional Kelly family, a quirky clan in which a 17-year-old protagonist communicates only through Beatles lyrics while her mother obsessively collects Disney memorabilia and tends to the remains of her dead pets.

It’s part of Vodrey’s pattern: Showcase a play at the KC Fringe and then take it to New York. Two previous shows by Vodrey — “Hanky Panky” and “Thank You Notes: Headed to Heaven With Flat Jimmy Fallon” — went directly from the Kansas City Fringe to the Midtown International Theatre Festival held each summer in the Big Apple. She was able to maintain the Kansas City casts for both of those shows when they were performed in New York.

For “ Hard Day’s Night” however, she cast New York-based actors — although three of them are from the Midwest — and had to line up a director and designers. New York Fringe shows are staged on tight budgets with minimal technical aspects because they have to be set up and dismantled quickly. “Hard Day’s Night” will share a venue with several other shows. Vodrey said she’s considering hiring a publicist so that her play doesn’t get lost in the shuffle among hundreds of offerings at the New York Fringe, which runs Aug. 14-30.

Vodrey will also have a play in this year’s KC Fringe: “Sue Aside,” a two-character piece she described as a drama. Featuring Scott Cox and Laura Jacobs and directed by Warren Deckert, the show will be at Just Off Broadway Theatre, 3051 Central in Penn Valley Park. The premise is that a therapist’s ex-boyfriend makes an appointment to see her under an assumed name.