“Thank You Notes: Headed to Heaven With Flat Jimmy Fallon,” produced in 2012, took place at the funeral of a suicidal woman. The year before, “Hanky Panky” showcased the wacky dynamics of a family waiting at the bedside of their dying father in a nursing home.

Vodrey’s new work, “The Frowning Vajayjays of Shady Pines,” produced by Melting Pot KC in its world premiere at the Just Off Broadway Theatre, tackles our sense of mortality at a nursing home in a small Southern town.

Three suitemates, Lila, Marilyn and Peggy, have just come from Lila’s roommate’s funeral. They are sad about the passing of their friend and fellow bridge player but the talk is light and sassy, with a sort of “Golden Girls” style of banter.

And of course they discuss their the ailments. Marilyn has a bad hip. Peggy suffers from emphysema. There doesn’t seem to be anything physically wrong with Lila except that she is a faded and dim Southern belle, an unthinking racist, who, after being married seven times, misses the simpler days of servants and segregation. “Lila makes Paula Deen look like Malcolm X,” quips Marilyn. Naturally, Lila is put to the test when her new roommate is…yup, you guessed it—a smart, funny African American woman named Bertie who can cuss up a storm and play a mean hand of bridge.

During the course of the play, sweeping topics concerning race are tackled with Lila constantly putting her prejudiced foot in her mouth. Marilyn and Peggy cluck their tongues, mortified by their suitemate’s tin ear and lack of emotional intelligence. By the end of the second act, both Bertie and Lila have come to the realization -- in a Kumbaya, hug-it-out moment -- that race and backgrounds are no longer barriers to a friendship. Love and loss are the ties that bind and what make all of us essentially human. 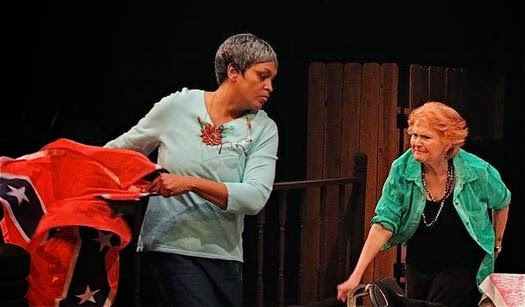 Under Harvey Williams’ direction, all four actresses have their moments to shine. Nancy Marcy as Marilyn is a randy, salt of the earth sort, who is sexually obsessed with the hunky physical therapist, Jeff (Jeff Smith). Petra Allen plays the upper crust, clueless Lila in a convincing yet ultimately sympathetic manner. Sherri Roulette-Mosley’s no-nonsense Bertie is full of four-letter surprises. And even Cindy Siefers’ sweet, fragile Peggy is a credible, well-rounded character.

The set is stripped down to a bare minimum: worn-out wicker furniture, a red rocking chair, a card table with four chairs. The staging is appropriate, considering the subject matter.

Overall, though, the play seems fragmented, trying to tackle too many big themes -- aging, death, race, stereotyping and injustice. And it’s all over the map in terms of tone. Is it a comedy or a heavy-handed bully pulpit railing against racial inequality? Preaching usually does not change hearts and minds. Humor and a deft touch often do the trick.