All week, we’ll be previewing the shows by MDC writers that will be featured in the upcoming Kansas City Fringe Festival, July 16-26. Click here for a complete schedule of Fringe shows by MDC playwrights (and staff!). 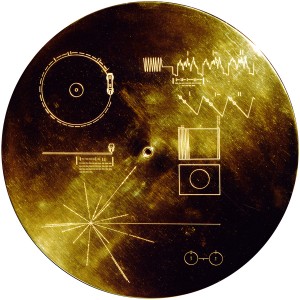 Voyage to Voyager
By Bryan Colley and Tara Varney

Carl Sagan takes you on a voyage to the Voyager Space Mission and the Golden Record with its message for extraterrestrial life to discover eons from now. The creators of last year’s Fringe favorite “Red Death” invite you to the magical dome of Gottlieb Planetarium where live actors, animation, and outer space collide in a comedic, informative, and unconventional theatrical event. It was written by Bryan Colley and Tara Varney, who also directs, and features Coleman Crenshaw as Carl Sagan.

“Voyage to Voyager is unlike anything I’ve ever written,” Colley says. “On the one hand, it’s an educational play that will teach you about the Voyager space mission and its Golden Record full of music and images - exactly the kind of show you might go to a planetarium to see - but it’s also a comedy about producing a show at the Fringe. The real story has Carl Sagan hiring some actors to stage a show about making the record. That way we can look at the Voyager mission from today’s viewpoint, rather than as a play set in 1977. In fact, the play exists in the past, present, and future simultaneously, so it’s not a documentary, but it’s not a conventional drama either. I guess you could call it a metamentary.


“Because it’s a play about an object, or rather the music, sounds, and pictures on that object, it was designed from the start as a multi-media show. That’s a scary thing to do at Fringe when you have so little tech rehearsal and anything that can go wrong will go wrong, but being able to produce this at the planetarium has made all the difference. The venue is perfect, the planetarium director Patrick Hess is awesome to work with, and we’ve got some terrific little bits of animation to break up the action on stage. It should be fun.”

Yes, in a Fringe first, Voyage to Voyager will take place inside Union Station’s Arvin Gottlieb Planetarium (30 West Pershing), at the following times: