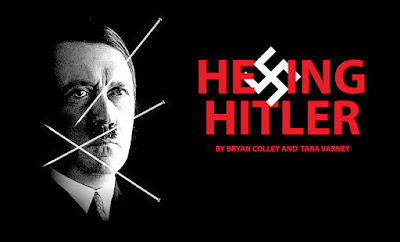 Join us for our May 2019 Monday Night Reading

Monday, May 20 / 7:00 p.m.
Second Presbyterian at 55th and Brookside
318 E 55th St / KCMO / 64113
The Midwest Dramatists Center will present a reading of Bryan Colley and Tara Varney's new full-length version of "Hexing Hitler" at 7pm, May 20 at the Second Presbyterian Church at 55th and Brookside (318 E 55th St). The reading is directed by Tara Varney and the cast includes Gary Wesche, Shelley Wyche, J. Will Fritz, Emma Carter, and Michael Golliher.

An hour-long version of "Hexing Hitler" was produced at the 2011 Kansas City Fringe Festival, and it has now been expanded into a full-length 90 minute play. It is a true story as told in a 1941 photo essay from "Life Magazine" about a party that gathered in a remote Maryland cabin to put a curse on Adolf Hitler and end World War II using witchcraft.

Leading the hexing was the successful writer William Seabrook, who popularized the word "zombie" in 1927, when he published a book, "Magic Island," about his adventures in Haiti, which served as the basis for the film "White Zombie" in 1932. Throughout the 1930s he was a best-selling author, world traveler, and journalist. He was also fascinated with witchcraft, black magic, and the occult. Along with writing about voodoo rituals on the island of Haiti, he wrote about eating human flesh in the jungles of Africa, battling alcoholism in an asylum, and joining a Bedouin tribe, much like T.E. Lawrence in "Lawrence of Arabia."

A companion play by Colley and Varney, "Sexing Hitler," was also expanded to full-length and presented in a staged reading at the Unicorn Theatre in 2016. It details the true story a Nazi program led by Heinrich Himmler to create inflatable pleasure dolls, intended for standard issue to Nazi soldiers. Along with connecting thematic threads, both plays are designed to use the same cast.

Come give feedback on our short plays,
and enjoy a night of local theatre!