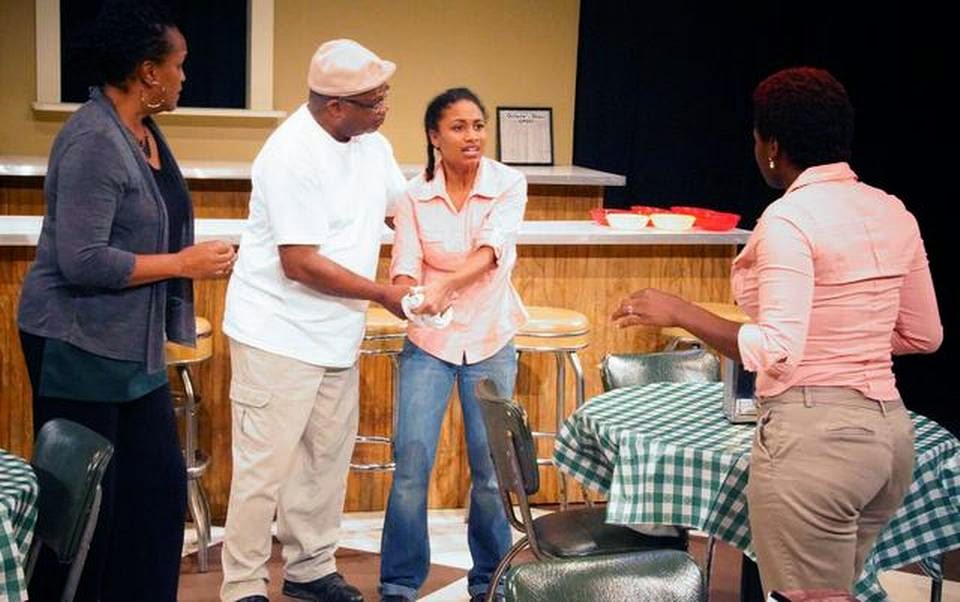 When a critic can see valid new plays by Kansas City writers two nights in a row, it speaks well for the creative energy in this theater community

In addition to Vi Tran’s “The Butcher’s Son,” which opened last weekend, a new work by Michelle T. Johnson is receiving its world premiere at Just Off Broadway. “Echoes of Octavia” is a family drama shot through with humor and reflections on African-American aspirations in the here and now.

Johnson’s two-act play, directed by Harvey Williams for MeltingPot KC, depicts a contemporary black family in an unnamed town that feels a lot like Kansas City. “Octavia” has a double meaning in this piece. It’s the name on a classic family-run soul-food diner as well as the name of a revered science-fiction writer, Octavia Butler. As an African-American woman, Butler stood out in a literary field dominated by white guys.

The central character is Zora (Aishah Harvey), who co-owns the diner with her father, Roscoe (Granvile T. O’Neal). Zora, whose mother named her for writer Zora Neal Hurston, understands the money end, and Roscoe knows how to cook and run the kitchen, which is why her late mother (the other Octavia) named Zora a full partner in the business in her will.

But Zora is also studying literature in graduate school and has an opportunity to accept a prestigious fellowship at Stanford University to write a book on Butler. It comes with a $90,000 stipend. Roscoe is opposed to the fellowship, because the diner is about to be torn down and rebuilt as part of a city redevelopment project, which potentially means big money for Roscoe and Zora.

Equally opposed to Zora’s possible move to California is her boyfriend Milo (Petey McGee), who runs a bar down the street from the diner. Milo’s feelings for Zora seem sincere, but his attitude about the relationship is so lackadaisical that a sudden marriage proposal is quickly brushed aside by Zora.

It’s nice to see committed performances by a mix of young and veteran actors. O’Neal, a senior member of the acting community, brings blustery exasperation to Roscoe and finds opportunities to exercise sharp comic timing in his exchanges with other characters. The best work, for my money, is registered by Roulette-Mosley, whose performance is precise, economical and heartfelt.

Harvey is a charismatic presence on stage, but she doesn’t find enough nuance in Zora. The character’s conflicts are clear, but the performance needs more emotional range. McGee too often suffers from a lack of projection, but in his hands the hapless Milo becomes a fairly complex, likable character. The high-energy Espinosa is fun to watch as the precocious Jessie. In his stage debut, McLendon is quietly effective as Zora’s academic adviser.

At the Saturday night performance, the cast generally was slow to pick up cues. Unaccountable pauses within dialogue exchanges slowed down the pace, and it appeared that some actors didn’t have their lines down 100 percent.

Warren Deckert’s lighting design and his set for the diner are simple but effective.

Johnson’s script feels a little too much like a construct at times. The outside forces — the redevelopment project, the fellowship — feel imposed, with the result that few of the dramatic events seem organic. A couple of flashbacks, in which McGee plays the young Roscoe and Harvey appears as the young Octavia, don’t add much.

Now that I’ve dispensed with the carping, I can say that Johnson is onto something with this play. It’s refreshing to see African-American characters dwelling in the present and wrestling with contemporary concerns. Some of the script’s awkwardness could be addressed by recalibrating the plot elements, and the storyline could be simplified to give the piece more narrative drive.