BWW Reviews: ECHOES OF OCTAVIA - A Magnificent Show to End the Season
By Steve Wilson 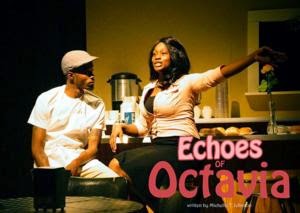 The world premiere of Echoes of Octavia opened Friday August 8 at the Just Off Broadway Theatre in Kansas City, Mo. Harvey Williams directs the Meltingpot KC production that runs through August 24. The premiere concludes the 2013-2014 season for Meltingpot KC that highlighted plays by local female writers.

Echoes of Octavia, written by Kansas City playwright Michelle T. Johnson, is the story of a young woman who has to decide between family and opportunity. The diner she owns with her father is expanding into a new entertainment district supported by the city. Simultaneously a prestigious college in California has accepted her application for a Fellowship. It is the story of choice between loyalty to her family and boyfriend, or being true to one's self and taking advantage of a once in a lifetime chance to live a dream.

Johnson has only been writing plays for the last three years and Echoes of Octavia sits in the top ranks of dramas written by local playwrights. She began on her journey as a playwright with the 2011 Barn Players 6 X 10 production. The Unicorn Theatre in Kansas City selected her as a featured playwright in their Writer's Showcase in 2013. For the 2014 Kansas City Fringe Festival she wrote Girl on Girl, which was produced at the Just Off Broadway Theatre.

Aishah Harvey stars as Zora Anderson, the young woman with all the decisions to make. She gives a very good performance as the daughter who is sympathetic to a young waiter, yet comes off angry and confused after given the choice to stay or go to California. Her concern appears to be trying to do the right thing for everyone, except herself. The transition of Zora in the second act is smooth from the angry young woman to one of confidence.

Granvile T. O'Neal is the father Roscoe, who is more concerned about the fate of his diner that what is best for his daughter. O'Neal is superb in the role, bringing an ease to character who calls his daughter selfish for even thinking about leaving. The use of lighting aids in developing his character, from the selfish father to one that overcomes his own tribulations to support his daughter's decisions.

Alisha Espinosa is magnificent in the role of Jesse, the high school student working as a waiter in the diner. Like O'Neal, she delivers her lines smoothly and naturally that their characters are able to develop with little effort. Espinosa has previously appeared at the Coterie Theatre and the Unicorn Theatre among others.

Sherrie Roulette-Mosley marvelously plays the stepmother Nellie. In the first act, it is easy to see her as a whipping post for Zora, who is angry because she married her father when she was her mother's best friend. It is the second act that her true character comes to light, tying some of the questions of the play together.

Zora has a boyfriend and his name is Milo, played by Petey McGee. Milo is self-centered and comes off with an air of selfishness as he tries to convince Zora to stay. Is it really love for Zora, or does he want to keep her helping with his business? McGee will perform this fall as Oberon in William Shakespeare's Midsummer Night's Dream.

Donovan McClendon makes his stage debut as Professor Lane, who encourages Zora to accept the Fellowship. His performance is somewhat forced at the beginning but by the second act he is more natural with his movements and dialogue.